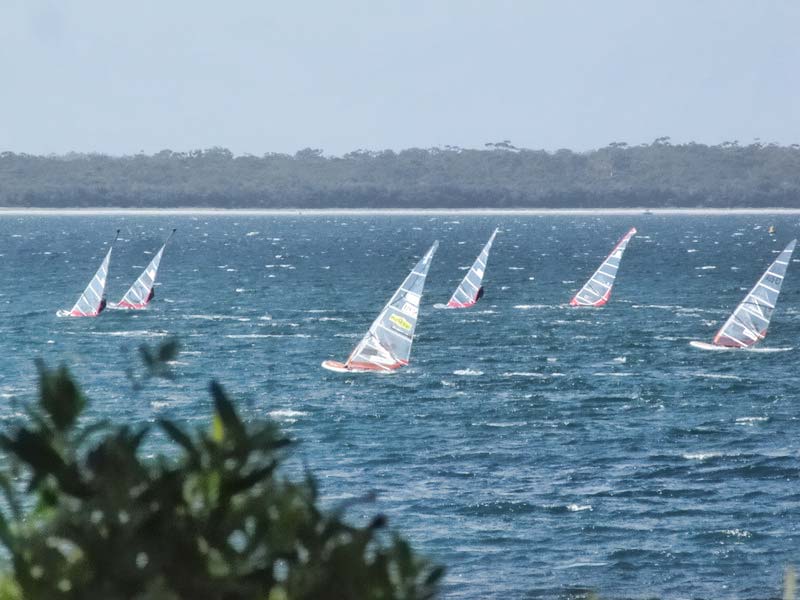 32 keen sailors rolled up to the test launch site behind Swansea on the Saturday greeted by a building nor-easter. The location was near perfect – aside from the long shallow to get past, this location was an idyllic paradise. Bit of tide running past the beach – note to all, don’t fall asleep on a couple of flotation noodles for too long unless you’re tethered to something fixed.

And after the debut of the new Starboard at the last event, some more new boards had arrived. Exocet have gone from a very cool looking, manly black board to a lightish grey, pink and purple motif – very, well..umm… french….plus a new JP, with the graphics designed in MS Word (and possibly the shape as well?).

Quite a few new boards….except notably for Brett, who although has a new board, decided that the peculiarities of the forecast meant that his older board would be the go….hmmm, interesting choice…..possibly influenced by his new power band?

The Power band website claims its products use “holograms embedded with frequencies that react positively with your body’s natural energy field” to improve core strength and power. It certainly had some sort of effect on his natural energy field – normally a top 3 competitor, Brett came 7th……….it is possible though that having just one band, on one arm might throw the body out of balance, and what’s really needed is a second band on the other arm. Hopefully Brett isn’t to perturbed by the experiment and will persevere for all our amusements….

The first two races were in an ENE gusting around the 14kn mark. Sam, who didn’t have the option of a 10.7 looked at the wind and decided the 12.0 would be fine, in no way supported by the rest of us smirking at the concept, as we rigged 11’s and 10.7’s. But the smirks flipped around rather quickly as Sam got to the front of the first two races and was never headed, followed by yours truly and Rick in third (who always seems to go really well at lake maq….)

Roger had the best of the ‘Free’ fleet with a 2nd and a 1st to Chris’s win in the first race, and mixed bag of results for the minor placings – showing just how competitive it is.

After lunch we got back out and the wind had swung a bit into a true NE and picked up, gusting to about 18kn. By this stage Sam had stolen a 10.7 from Barry (some sort of strategic alliance by the two? Team Pawkes?) and Remi had busted out a new exocet sail. And the course was now getting really rough from boat wake plus had the horrible inclusion of weed, which effected everybody to various levels at different times, and helped to mix the racing up a bit.

I arguably had the best of the weed in the 3rd race taking it from Byron, but karma caught up with me in the 4th race with weed up the first work, and any slim chance of tying it up with Sam disappeared with him sailing off in the distance.

The Free fleet mixed it up as well with Adam Craven winning the 4th race by a nose hair and Mr Lake Maq, and Team Pawkes Ninja Baz mixing it up for the top places with Baz heading the points overall with morning leader Roger in second and Ad’s 3rd. Four races, four different winners and four runners-ups confirms how keen the lads are taking it – great to see.

Sunday was a lovely day sitting around debating wether the wind was going to come in or not before finally deciding it wasn’t and calling it quits around 3pm. After Sam and I, was the next 8 sailors covered by less than 8 points with Byron taking 3rd overall, just edging out Rick on a count back, and taking the series lead outright heading into the half-way heat at Sydney.

Great to see a Qld contingent with long time friend of the fleet David Middleton and new friend Clayton McDonald making the journey down.

Massive shout out to the Marmong guys who manned the boat and set the biggest course we’ve had in a while.