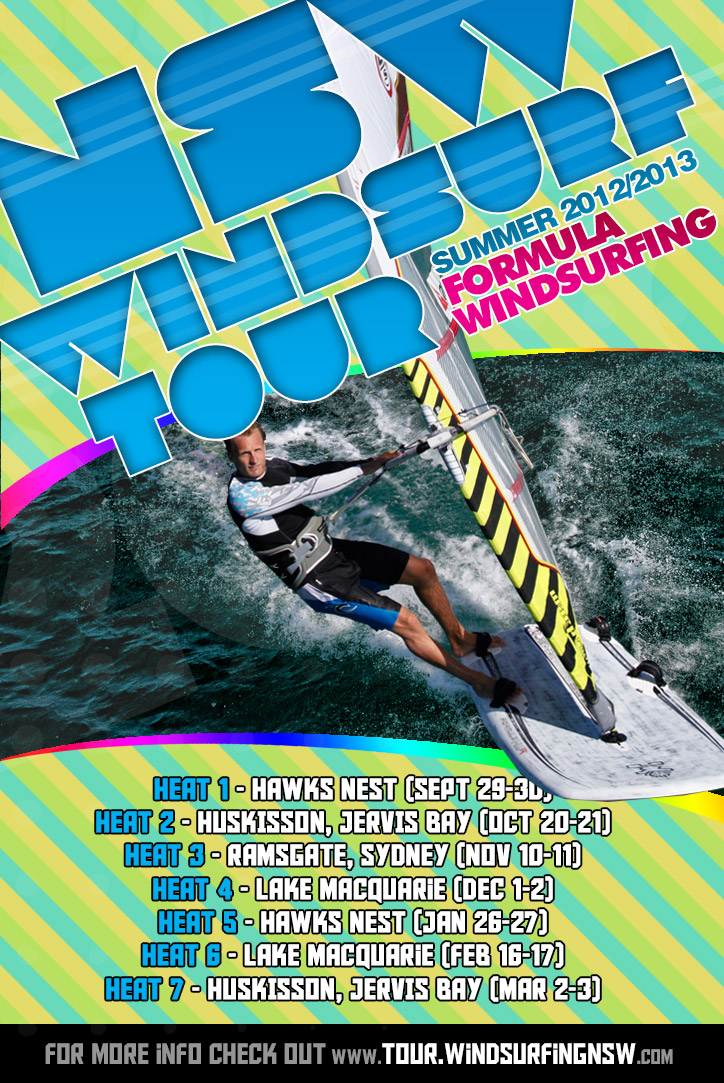 NSW Formula Windsurfing Series 2012-13
Heat 1, 29-30 September
Jimmy’s Beach, Hawks Nest.
Hawks Nest proved again what a special location it is to holiday and the long weekend provided what is predicted to be a hot, dry and windy season ahead. Those of us who choose to take advantage of this beautiful location and the school holidays, headed up early to get in some much needed practice before the racing starts proper, and we were rewarded with 20+ knot NE sea breezes and flat water all week prior to the predicted mismatch of conditions for the weekend.
Saturday: After a long winter the first event of the series is always a bit of a shock to the system. Dusting off equipment or taking shinny new kit out of the bag is the usual state of affairs. Come Saturday morning we had 20+ westerly winds channeling down the beach. Luckily for us, Hawks Nest is one of the only locations we can actually race in a westerly as it is cross on shore and relatively clean and even more importantly, it was warm.
Race 1 kicked off, just as the breeze dropped to the lower end of the range, much to the delight of Steve Floyd AUS-222 who had earlier stated that the wind would not build and it was a big sail day. Steve was looking like a super star after lap 1 until the full force of the wind kicked in, rewarding the small sail contingent. Byron McIlveen AUS-747 absolutely killed it and won by a good distance with Barry Fawkes AUS-2111 cleaning up in the Free Formula division.
Race 2. The wind had now settled down to about 15knots but most of the fleet had succumbed to their smallest sails as the strength of the gusts in the first race had caught a lot of people off guard. Steve Walsh AUS-55 sailed a brilliant race for a good victory in the shifty conditions, with Remi Dunoyer and Steve Floyd making up for their DNF’s in race 1 by taking the minor places. Nathan Hohnberg AUS-11 having returned from a back injury was also on the pace with 2 x 4th. The Free Formula fleet celebrated a victory for the first time to Andrew Vecopoulos AUS-966 with Lewis Pullen AUS-80 in 2nd.
Race 3. The wind was now up to 20+ knots, but was clean i.e. not gusty. Steve Walsh, Remi and Brett Morris AUS-8 rounded the 1st mark only meters apart and locked in for a full on down-wind sleigh ride to the bottom mark, where positions were unchanged until Steve’s hand slipped off the boom, handing the lead to Remi, who had no intention of making the same mistake and muscled out a great victory. James Farley AUS-173 became the 3rd winner in 3 races in the Free Formula.
Race 4. Windiest race of the day! With the wind close to our limit of 25knots and the short but steep chop building up, this had the potential to be a test of seamanship as much as racing pedigree. Brett won in convincing style with Byron in 2nd. Nick Austin AUS-151 and Wayne Bowness AUS-98 had their best results also in the trying conditions. James Farley showed a clean pair of heals to clock up 2 bullets in a row.
After a quick pack up it was off to watch the Sydney Swans give Hawthorn a lesson of how to play AFL. Under dog victories are always sweet…….
Sunday. Sunny with 15mins of 12knots winds every 15mins. This is the perfect scenario for a family day at the beach with lots of family/girlfriend time combined with some windsurfing when the wind came in. Unfortunately it is not ideal conditions to run racing, as every time a race was started, it faded during the race. This resulted in a series of cancellations. One had to feel for Tibor Ferenczy AUS-1, who was rebelling in every race, only to be robbed each time as the wind such off to zero again. Eventually racing was called for the day and a repeat performance of packing up as quickly as possible so we could head off to watch the Rugby League final.

With 4 winners from 4 races in the open and 3 winners from 4 races in the Free Formula, it is obvious that we are in for a competitive season. Congratulations to Brett Morris and James Farley for winning their respective divisions.
Thanks to the new race committee who managed to pull together our first event, and also our guest Race Officer (Jesper Vesterstrom DEN-111) who really made the most of the crazy conditions to give us the maximum amount of racing. Thanks to Sean Dayhew and Adam Craven for the fantastic photos also….Some pretty special shots.
Please remember to pay for the series on line Join

We want to encourage the participation in our facebook page also, where you can comment, post photos and indicate if you are attending the next events as this make organizing so much easier. Facebook

Heat 2 is at one of the best locations in NSW (Huskisson, Jervis Bay 20-21 Oct)…. Huskisson Map

Photos can be found here. Photos(FB)

Results can be found here. Results(pdf)