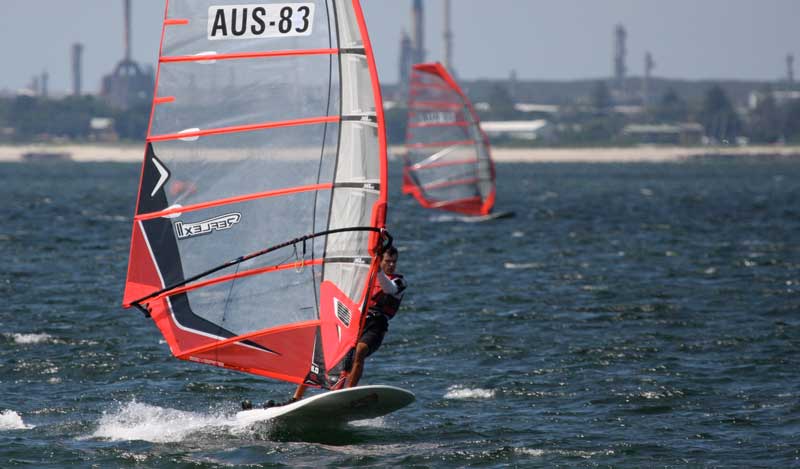 Rain, rain and more rain. Wind, wind and more wind… You can complain all you like about being wet, but at the end of the day we came to Jervis Bay to race and the wind gods accommodated with perfect 15-18knot NE winds for the entire weekend.

28 hard core Formula races rocked up to the premier windsurfing spot in NSW for the 7th and final race event of the 2011-12 season. The new “drop” rule that stated that you can only drop the 7th event if you competed had the desired effect with all of the top competitors present to battle it out for the series honors.

Saturday: Brett Morris AUS-8 rigged a small sail anticipating the wind to build and was rewarded win in race 1. Remi Dunoyer sailed a killer race winning race 2 before Sam Parker finally pulled his finger out with 3 bullets in a row.

In the Free Formula division David Howe Aus-688, Roger Lucas AUS-303 and Tim Ford AUS-71 took turns at winning races and along with the likes of David Flanagan AUS-057 had amazing close racing often finishing within meters of each other.

5 races were plenty for one day, so it was time to pack up and head to the new and improved Husky Pub for the traditional Saturday night dinner. It is fair to say that dinner will be remembered for a long time for all the wrong reasons. Our picturesque outdoor setting was a good concept, but torrential wind and rain made it all but a farce.

Sunday: 4 more races in exactly the same conditions with race 6 starting right on the strike of 11am. Brett started the same way as the day before with a win. Remi, not to be out done and just to prove that his win yesterday was no fluke took the next 2 races before Brett finished the day off with a victory. The real battle was the ever changing minor places which were being filled by Byron AUS-747, Nathan Hohnberg AUS-11, Murray Towndrow AUS-720 and the fastest yet most inconsistent guy in the fleet Nathan Bowness AUS-70.

I’m not sure what motivated Tim Ford but the Free Formula fleet was dominated by him with 3 bullets.

Overall it was some of the best racing of the season, even if it did rain constantly. Brett secured a victor from the ever consistent Byron and the rapidly improving Remi in 3rd. Free Formula was convincingly won by Tim ford with David Howe and Roger Lucas 2nd and 3rd respectively.

Huge thanks to our race OD, Nick Nelson who ran a slick event in truly miserable conditions. 9 races in 2 days is enough of a testimony, but Sunday was competed by 1.30pm which allowed ample time to get to the prize giving and enjoy lunch before heading home tired, but extremely satisfied.